The Problem with the Foo Fighters VR Super Bowl After Show 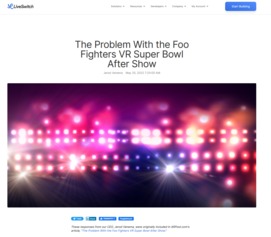 Meta's announcement of a post-Super Bowl Foo Fighters concert, hosted entirely in virtual reality, was met with great excitement among music and VR enthusiasts alike. The event itself, however, became the subject of controversy on social media, with many users claiming that they were unable to access the event due to Meta's allegedly spotty hosting.

So, what happened? And, more importantly, what can tech leaders draw from the event as a lesson in how to prepare for massive scale VR events and broadcasts?

Check out this blog post for a close look at the reception and the lessons learned from Meta's Foo Fighters VR concert.