This resource is no longer available

HPE and AMD - HPE ProLiant Gen10 Plus: The power of EPYC fully unleashed 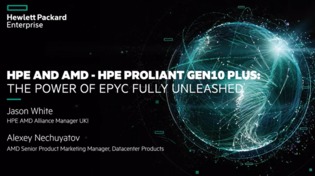 As we move into the “data era” organisations are migrating to hybrid cloud environments and demanding performance-optimised technology to support data processing and changing business needs.

The new HPE ProLiant Gen10 Plus systems, powered by the 2nd generation AMD® EPYC® 7000 Series processor, are designed specifically to capitalise on the data growth dynamic in the market and bring new levels of performance to the portfolio.

Watch this webinar from HPE and AMD to learn how the new HPE ProLiant Gen 10 Plus servers with AMD EPYC processors give greater processing power, faster memory speeds, and improved data transfer rates – critical for organisations to get ahead in this data-driven world.

This resource is no longer available.

Return to previous page.
Back to top