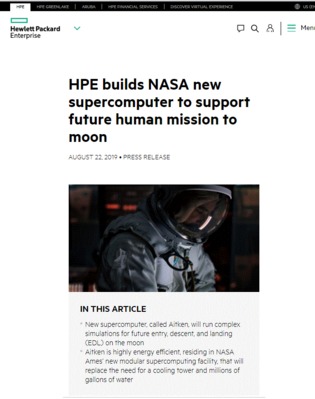 Hewlett Packard Enterprise (HPE) announced in August 2019 that the company custom-designed a new supercomputer for NASA’s Ames Research Center to support modeling and simulations of entry, descent, and landing (EDL) for the agency’s missions and Artemis program, a mission to land the next humans on the lunar South Pole region by 2024. The new supercomputer, which NASA Ames has named “Aitken,” is an initial development of a four-year, multi-phase collaboration between HPE and NASA Ames.

Brought to you by HPE and Intel®.