What's next for Ethernet? 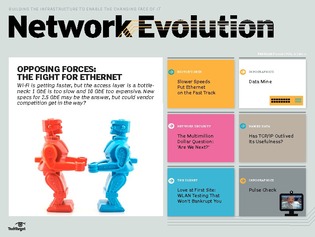 The next generation of Wi-Fi technology, 802.11ac Wave 2, will be able to push multiple gigabits of data per second, but most enterprise networks wouldn’t be able to take full advantage of it with the infrastructure they have in place today. That’s because campus LANs typically have deployed edge switches that can, at most, support 1 Gbps. That bottleneck could be avoided with 10 Gigabit Ethernet (GbE) edge switches, but it’s a move that can be cost prohibitive for many IT departments.

Also in this issue, we look at whether the network can help identify, stop and prevent data breaches like some the cyberattacks that have recently plagued the likes of Sony and JPMorgan Chase. Additionally, we explore a research project called Named Data Networking, aimed at developing a new set of protocols that would replace TCP/IP and eliminate IP addresses.