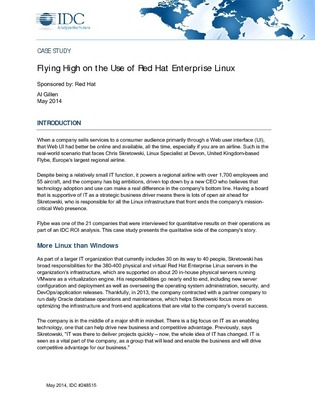 When a company sells services to a consumer audience primarily through a Web user interface (UI), that Web UI had better be online and available, all the time, especially if you are an airline. Such is the real-world scenario that faces Chris Skretowski, Linux Specialist at Devon, United Kingdom–based Flybe, Europe's largest regional airline.

Despite being a relatively small IT function, it powers a regional airline with over 1,700 employees and 55 aircraft, and the company has big ambitions, driven top down by a new CEO who believes that technology adoption and use can make a real difference in the company's bottom line. Having a board that is supportive of IT as a strategic business driver means there is lots of open air ahead for Skretowski, who is responsible for all the Linux infrastructure that front ends the company's missioncritical Web presence.

Flybe was one of the 21 companies that were interviewed for quantitative results on their operations as part of an IDC ROI analysis. This case study presents the qualitative side of the company's story.